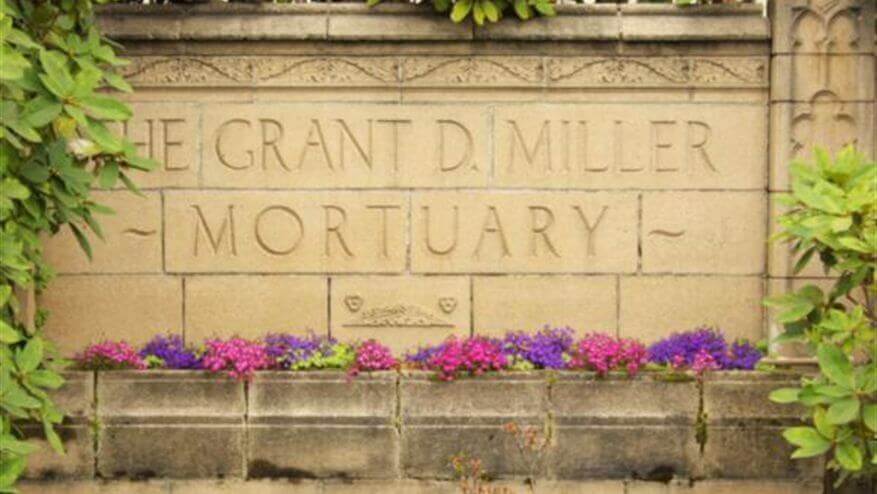 Dr. Frank L. Adams lived in the original house from 1897 until 1920. After he sold it to Bessie Wood Gustason in 1920, she converted the building to a mortuary. The Bessie J. Wood Co. sold the business to Grant Miller Mortuaries in 1930. In 1933, Mr. Miller added a beautiful chapel, which is used to this day. Wood and Miller were partners in a mortuary at 2372 East 14th Street for around ten years before Wood moved to a new location downtown in 1908. Grant Miller was County Coroner from 1914 until 1938 and an EBMUD director from its organization in 1923 until 1943. He passed away in January 1945. The Grant Miller Mortuary on East 14th Street remained open until 1978.

John Cox III opened his mortuary on Howe Street in 1948. After he passed in the late-1950s, his wife Loretta and daughter Gee Gee Donnelly continued to operate the business until they closed their location and merged with Grant Miller Mortuary in 1984. John Cox IV, who was a former priest at St Leo’s, became employed with Aurora Casket Company and his son Ed, the mortuary founder’s grandson, continues to follow in his father’s footsteps in the Oakland area.

The firm continues to serve generations of families of all faiths from all four mortuaries.

You are welcome to call us any time of the day, any day of the week, for immediate assistance. Or, visit our funeral home in person at your convenience.

About Us
Testimonials
Meet Our Staff
In Our Community
Our History